Sashikant Khapre owns large tracks of grape farms in Nashik. While he is satisfied with the quality and quantity of his produce, he is unhappy with the end-price it is fetching.

“The distributor of these grapes is selling them a much lower price because a large part of the cargo is damaged during transportation. When we transport to Delhi or Kolkata, they are much more damaged and lose their most important trait, freshness,” he says.

Khapre is not an exception. He is one of the many farmers and distributors of agri-produce who face this challenge. Lack of right modes of transportation, challenges presented by roads and infrastructure reduce the shelf-life of the produce by a minimum of one-fourth. Grapes have a shelf-life of two days as do most other fruits and vegetables.

Timelines of transportation are key to the price that agri-produce fetches as they have to reach the right markets with the most demand, quickly. Not all cargos make the cut. Perishable commodities like meat, milk and dairy are the worst-affected by large-scale infrastructure blocks. Other forms of agri-produce like sugar, rice, wheat and other millets are affected by sub-standard transportation.

All roads lead to traffic

In India, 65% of freight are transported by the roadways which are mired in severe traffic snarls. The maximum highway speed achieved by trucks and buses is merely 30-40 kilometers per hour, as per a report by PWC. Indian national highways also contribute to a mere two percent of total roads. In spite of that, highways carry 40% of the total traffic, leading to congestion.

While India has fairly progressed in building and maintaining highways, rural roads are still badly connected. Around 40% of rural India lacks all-weather roads presenting a tough task to farmers. The pressing need to transport produce quickly and efficiently is stressing farmers financially as well.

“We spend a lot on truck transportation. We even go to the extent of giving rewards and bonuses to drivers and transporters who manage to deliver cargo on time,” said Khapre.

Increased investments in highways and roads can alleviate this pain in the distribution sector. The efficiency of infrastructure can cut down average trip time and increase freight trip volumes, saving costs to farmers and end-users.

Infrastructure improvement is only one part of the problem. The commodities sector needs best-in-class transportation vehicles with world-class features. Heavy-duty trucks that offer excellent fuel efficiency, cruise control and have high levels of safety can cut down many costs of transportation, including insurance.

Trucks with rugged aggregates which are highly reliable can cut down losses during transportation. Vehicles with excellent mileage can drastically reduce costs to the transporters and have a positive impact on end-prices of commodities. Strong trucks with good payloads can cut down trip time, improving shelf-life of produce delivering more in less time and fuel cost. Robust trucks, however, are not enough, they should also be aptly sized to manoeuvre traffic-hit city roads as well as national highways. Trucks which offer good cabin comfort for drivers cuts down idling time of trucks and cargo, pushing up efficiency.

Trucks should be designed in a way that they are small enough to easily navigate traffic yet carry a high amount of loads. Eicher Pro 1049 has a large flat bed, like which allows them to carry much more load than any other truck of the same size. The truck is one of the bestsellers of the PRO series of Eicher. More importantly, Eicher Pro 1049 is known for its best-in-class fuel efficiency and pick up and acceleration allowing drivers to make the best of unpredictable roads and traffic! The kind of mental and physical discomfort that a driver undergoes is hardly considered. The cabin of Eicher 1049 has been specially designed to provide drivers comfort during long journeys resulting in increased efficiency. 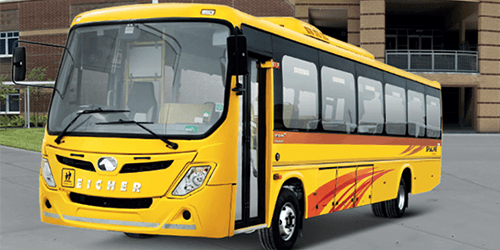